Seaweed is an integral component of the marine ecosystem that contributes to its rich biodiversity.

A seaweed variety As cophyllum no dosum is known for its extraordinary properties in affecting the growth and production capabilities for certain plants.

Advancement in the studies of plant genetics and biotechnology is allowing scientist to have a better understanding of how biologicals can affect certain aspects within the plant. This, along with Improvements in the extraction methods from plants and organic matter, have brought an increase in interest and capabilities of companies to offer quality biological bio stimulant products to the agricultural sector. Ag Bio Logic, a bio stimulant product company based in South Carolina, USA, has been marketing quality products over three decades for crop production.

“I met with Dr. T.L. Senn, Head Professor Emeritus, Department of Horticulture Clemson University in the fall of 1991. He provided me a copy of his book, Seaweed and Plant Growth, published in 1987 along with numerous publications of his studies utilizing not only seaweed extracts but also humic acids derived from leonardite ore. It inspired me to begin the process to establish a market for products containing biostimulants,” says Jerry O’Dell, co-founder of AgBio Logic.

Dr. Senn encouraged the use of both seaweed in combination with humic acids in formulating AgBio Logic’s initial product. They have since taken further the concept of stacking biostimulants by adding additional stimulants with their latest product formulation.

Bringing Legitimacy and Awareness to Biostimulants

The company’s impact in the biostimulant space is largely facilitated by early years of product field trial work. O’Dell spent nearly the first decade in obtaining research trials for various vegetable and row crops. Most of the trials were conducted by land grant universities located in the Southeastern region of the U.S. Products for these trials consisted of a combination of seaweed extracts, humic acids, nitrogen, phosphorus, potash, macro and micronutrients. In 1997 studies begin with Dr. Ronnie Heiniger cropping systems specialist with North Carolina State University. Studies were with soybeans, wheat and corn. Yield results from a product applied 2x2 with starter fertilizer at planting for corn were most impressive.

It has been said that people are your best asset. There is no better example than with AgBio Logic where this is the case

AgBio Logic sought corn farmers who were implementing precision farming practices and using yield monitor technology. They were used as ways which helped determine return on investment from adding the biostimulants as an input.
Beck’s Hybrids headquartered in Atlanta, Indiana conducted four consecutive years of corn studies. A defining moment for AgBio Logic came in the fall of 2016. That year Beck’s initiated the concept of "PFR ProvenTM" (Practical Farm Research) products. The product used was called “Start Right” the predecessor to “Start Right 2.0.” It was the first biostimulant product receiving their designation of “PRF ProvenTM.”

Cory Atley and his father Carl farm 10,000 acres of corn and soybeans in Cedarville, Ohio. They implemented three separate trials in different locations using “Start Right” the first year. The results in each trial were phenomenal. They used it on every acre of corn the next year and were one of the first to use “Start Right 2.0.” 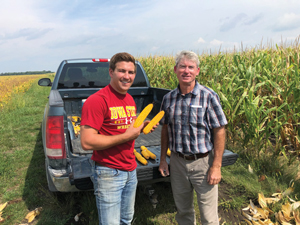 “Start Right 2.0 has been my go to biological for in-furrow and 2x2 products for a number of years. I have seen a significant increase in bushels per acre on all our corn ground. We have tested it against other products, and so far, no other product has come close to Start Right 2.0,” says Atley.

Another testament to AgBio Logic’s products is from Mitchell Hora a seventh-generation farmer and the founder of Continuum Ag a company focused on regenerative soil health based in Washington, Iowa. “We’ve tested a couple dozen soil health focused products, but the consistent yield and ROI positive products have come from AgBio Logic. That is why we expanded our use of the products to cover our farming operation this year,” says Hora.

Continuum Ag recently was chosen winner of the startup pitch competition at the Regenerative Agriculture and Food Systems Summit held in Amsterdam, Netherlands.

A group of carboxylates - mimics the secretes of microbes

Soil bacteria - 16 strands which aids in providing nutrients for plants

The Future for AgBio Logic and the Biological Industry

AgBio Logic from the beginning has had the good fortune to get to know individuals and partner with companies who were and remain to be knowledgeable with capabilities to formulate and manufacture quality products. O’Dell states, “It has been said that people are your best asset. There is no better example than with AgBio Logic where this is the case”.

The company’s objective has always been to bring awareness of the benefits of biostimulants and provide quality products for the agricultural sector. In doing so, seek new discoveries and relationships.

AgBio Logic’s foliar products are called “Over The Top” with each having a sub title for the specific crop to which it has been formulated i.e. “Over The Top” Soybeans. They have been developing a market for several other crop products and feels each has the potential to have an impact in the market place.

Reports from within the industry are predicting the use of biologicals to continue to grow worldwide. The U.S. is expected to be one of the largest growing countries utilizing biologicals.

O’Dell realizes he is fortunate and blessed to witness the success AgBio Logic and the industry are having. He feels he may have a few more good years ahead with his father Paul who remains involved in the family farm operation recently celebrating his 100th birthday. 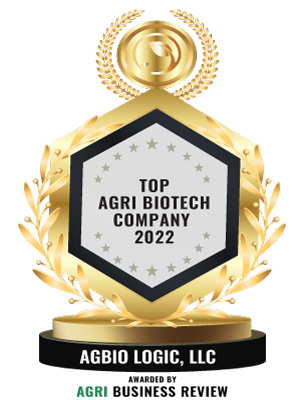 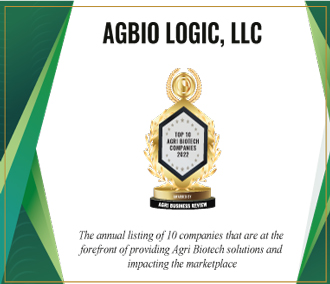